If You Build It…

Catherine Keller once asked, “What is theology but an incantation at the edge of uncertainty?”  I can’t help but consider that the same might be said of filmmaking – or more specifically, of Praying the Hours.

It was a faithless act, really – saying yes to Lauralee.  Or, if you prefer, it was a leap to faith in Kierkegaardian terms; it was not taken out of or because of.  Rather, a leap was taken, so faith became necessary.  My deep love and appreciation for LL notwithstanding, there was no foreseeable reason to say yes.  I haven’t aspired to express myself artistically in front of the camera for years, there would be no financial compensation, and the commitment would be formidable.  Still, I had an inexplicable compulsion to make what might be called a bet, a gamble – even a challenge or a dare – not to Lauralee, but to something else.

I have a friend, Jennifer, who is a practicing Hindu.  She tells me that when she goes to the temple, she hopes for the reciprocal experience and blessing of darshan, which involves the act of seeing and being seen by the deities of her faith.

In order for darshan to occur, the deities must be invoked to inhabit constructed representations, in this case statues, bearing their respective likenesses.  She tells me that if there is no deity, there is no exchange, no darshan and of course, no blessing.  But what has this do with filmmaking?

Elizabeth Gilbert has spoken of the illusive nature of creativity, explaining that in ancient Greece and Rome, creativity was not believed to originate in humans.  Genius was not a state to be achieved or a thing someone could be.  It was something disembodied, something independent, something other.  It could not be possessed or controlled, but it might be encountered.  Since then, the enlightenment has brought about a shift in conceptions concerning the locus of creative enterprise.  As the spaces for conversation about that which lies beyond the realm of epistemological verification disappeared, the locus of genius, creativity, and inspiration shifted to human beings.  As Wittgenstein famously concluded, “What we cannot speak about we must pass over in silence.”  But passing over in silence need not imply that we can’t at least leave an empty space at the table.  You know, just in case.  For my part, participating in Praying the Hours is an attempt to leave just such a space. 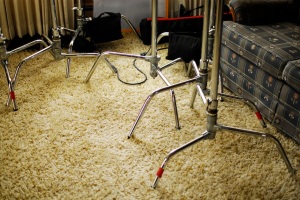 Through my experience thus far, I’m beginning to intuit that faith resides in the building, the constructing – or the leaping – as it were.  For me, it began with the incantation of an affirmative response; the ‘yes’ in the absence of reason.  An openness to possibility, a bet, a dare to that which must be passed over in silence.  Now, collectively, the onus is on us to set a stage here, at the edge of uncertainty.  Our construct, our representation is comprised of C-stands and lanterns, makeup, hard drives…  The equipment, the material, the medium is really not important.  It’s all just matter unless, amidst our strange alchemy, the inexplicable happens and the ineffable decides to shows up.

This entry was posted on February 24, 2012 by Rob Bethke. It was filed under Cast, Filmmakers, Philosophy, Production and was tagged with catherine keller, elizabeth gilbert, what is theology.