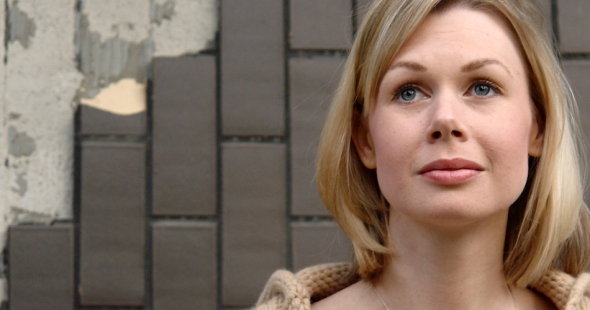 Using the ancient practice of fixed hour prayer observed by the Abrahamic faith traditions, Praying the Hours personifies each hour into a character to tell a story of a 24-hour day. In the feature film, Traveling Man visits with each of eight friends on the day of his accidental death, and—as he crosses over from this life into the next—sees life anew from the perspective of eternity. In the eight short films that expand the project, the story of each hour is told in more detail.

Here, Director Lauralee Farrer comments on the casting of Beth Castle as the hour called Vespers, in The Story of the Grieving Fiancé.

Beth, as the Grieving Fiancé, portrays one of the project’s most demanding roles—the story of a woman on the cusp of marriage whose dreams die with her fiancé, the Traveling Man. In the story of Vespers, it’s fitting that the Grieving Fiancé’s tale is symbolized by the setting of the sun. Her grief is so great, she wonders whether the sun will rise again on another day. She wonders if she wants it to.

We cast Beth, whose character is younger sister to “Lauds” (Karla Droege), because both her person and her spirit seem translucent, as if a light shines from deep inside—which, having known her for some years, I can say is exactly the case. It is difficult to see anyone suffer, but in the case of a character like that, it is especially poignant. When her luminous transparency reveals such piercing grief, it’s like looking too long at a harsh light. The memory of it stays with you.

Beth studied acting at The University of Oklahoma before making the move to Los Angeles in 2003. Since arriving on the west coast, Beth has played roles both in front of and behind the scenes of numerous projects that she’s been passionate about. A member of Hollywood’s Actors Co-op theater company, she recently produced a successful run of To Kill a Mockingbird. Beth is a publicist at CSPR Agency where she is a liaison between journalists and various studios.

As telling about Beth as her drive to act is the knowledge that her arrival in Hollywood revealed to and developed in her a fervent compassion for women working in the sex industry. For years, Beth volunteered for an organization called Treasures, whose unique intention was simply to communicate to the women they served that they were loved and valued. Beth is married to Greg Castle, a fellow OU alum and artist, with whom she shared a few brief but memorable scenes in the upcoming Farrer-helmed feature Not That Funny.