A Producer in Charge of Prayer

My name is Grace and I am lucky enough to be the producer overseeing prayer for this project. Never heard of this fascinating title? I will go out on a limb and say you’ll be hard pressed to find another producer of prayer for a film. Little credit for this is due to me but to the nature of the Praying the Hours project, and the importance that director Lauralee puts on prayer as an integral part of the production.

The Praying the Hours project is being built on a legacy of prayers—for many years Bette Farrer, an intercessor and Lauralee’s mother, prayed continuously for the movie. Her prayers form the foundation of what we continue to build on, and though she has moved

on from this life to the next, her mantle has passed on to those of us who have committed to pray for this project. It’s a privilege to follow in such awesome footsteps and to be part of something that God is creating here on earth as He has already done—I believe—in heaven.

On the most basic level, my job is to inform the prayer team on a regular basis of the needs and requests submitted by the production team and to be a conduit between the two. That, however, is like saying that flying is only about getting from one place to another—without taking into consideration the miraculous adventure of flying itself. Prayer is an organic, living state of being, and I have the immense privilege of experiencing it with our production crew and prayer team. What makes this film unique is that God’s will and guidance is sought every step of the way. Story? We pray. Equipment? We pray. Finances? We pray. Cast members? We pray. You get the idea.

We are nearly a year into this project now (in the current form) and I can’t decide which I find more amazing: God answering all of our prayers (which shouldn’t surprise, but you know it does!) or how people have been responding to the filming process and even more so the call to prayer. Maybe both are equally awe-inspiring.

A constant source of prayer requests have been for finances and equipment. Can you blame a small independent film? And yet, often at the 11th hour, God has miraculously made possible that which would seem impossible. Although God has not dropped all the money we need on our laps, he has provided for us at every step of the way. Our human preference might be to say, I’ll take the whole lump sum, God, but God seems more interested in the process. As a team, we have, time and again, gone before God asking for what we need and He has answered in His own unpredictable way. I have seen what this does. It requires us, His people, to be in constant communication with Him—which perhaps is the whole point. Does it still require a lot of faith and going out on a limb? It sure does! But it’s also an amazing experience of fellowship and faith.

Behind the scenes of this project are countless prayer team partners who have agreed to pray for our film. I see them as our silent crew that give of themselves without acknowledgment. Each member of our prayer team is a source of inspiration and encouragement for me and I am grateful to be behind the scenes in prayer with them.

Prayers for a Holy Death 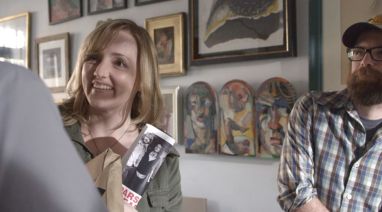 A strange thing happened on our first day of principal photography for “None: The Story of the Mournful Songwriter.” The script called for a woman to interrupt the main character “None” (Aaron Paul Ballard) as he is trying to write a song. She urges him to open his frame shop early because of a framing emergency.

Because framing “emergencies” are hard to come by, we had concocted this idea that she wanted to frame a rock and roll poster for her boyfriend’s birthday party that night.

A long and equally strange series of events led me to send a Facebook message to director Michelle Steffes the night before and ask if she might be available to play that customer. She wrote back, “do you want me to act? Or to help you find someone?” I knew for certain I wanted her to play the customer, but I couldn’t explain why. So I didn’t. A great sport (and a good actress!) she said she would give us her day, but that she had one chore she had to take care of: a framing emergency. Imagine her surprise to be called to the set of a functioning frame shop.

Her boyfriend’s father had passed away that week and she had to get his photo framed for the memorial service.  A

strange coincidence. While I was trying to tell her what I wanted for the first scene, all I could think about was her boyfriend’s father.

Finally, I realized why: the hour of None is when monks go into their cells alone and their prayers include the petition for a “holy death.” That means they face the disappointments that accompany the “none” season of their lives, and ask God to sanctify their remaining years. I asked: will you let us frame this photo in the film? She called her boyfriend, and he said yes.

That found moment shifted the tone of the whole scene. When her character returned to pick up the frame job, she was invited to an impromptu Parson Red Heads concert that night, as a way of lightening what was sure to be a heavy evening. She asked what she owed for the framing job, and I told Aaron, “just tell her it’s on the house, and to ‘come back in happier times.’” So, Aaron said just that. And, in a case of life imitates art, he gave her the framing job he had done, and he choked up on every take (and so did I). Later that evening, when None sees Michelle at the concert, there is a brief but very genuine moment of connection between them. We did not film what we planned, we filmed what we were given.

I do not know Michelle’s boyfriend, but I  spent quite a bit of time with his father’s photograph that day, filming it and framing it, and—for my part—praying for him and for the family. It was a very rich and mysterious connection. Just the sort of thing one should expect from this particular hour of prayer. We asked permission of Joey (through Michelle) to tell this story, and he agreed, adding: His name was David. Rest in peace.

Calling at a Decent Hour 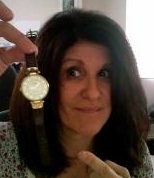 When we were in Indiana, early one morning before a day of shooting, I texted my friend Keri Tombazian to ask her to pray for me. I realized with horror that I had texted her at a little before 3 a.m. in Los Angeles (or at the hour of Vigils). Later, at a “decent” hour, I texted again to apologize. Typical of Keri, she replied: “don’t ever worry about that. My phone is on kairos time.”

Kairos, of course, means “grace.” Chronos time is the polar opposite, it is unforgiving, relentless, unstoppable. That’s the time we live by, mostly, with the exception of the transcendent kairos moment here and there. In a conversation with Tricia Harding the other day we were both bemoaning the fact that in this life, at least, we will always be caught in tension between chronos and kairos. The late Ray Anderson put it this way: we are made of dust yet we have eternity in our hearts.

Making this movie that focuses so intently on the hours, you’d think the one thing I wouldn’t forget is time. The truth is, I not only forget the 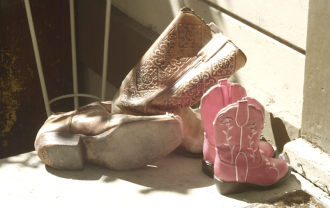 hours, I forget to pray them. That’s a short route to hypocrisy and to losing sight of the purpose of this ambitious project in the first place—which is to dive more deeply into the mystery of the place where time and prayer merge.

So, we have a modest plan. We have a small team that thinks about distribution and social media, as we hope that by the time we’re done with this project we’ll have our own delivery system for it. In those conversations, we’ve been considering the value of Twitter for slowly building an audience. We invited Eric Jessen and Matt Lumpkin to one of our producer meetings to give their opinions on the subject. Both said the same basic thing about the secret to Twitter: say something interesting.

Among us, we decided what would interest us would be a daily tweet at a specific hour of prayer with a reflection, scripture, or thought about the personality of that hour. To remind us that while we are making the movie Praying the Hours we ought to be praying the hours as well.

Starting on Monday, March 26, 2012, and for 30 days thereafter, we will tweet every day at 3 p.m. at the hour of None—the hour we finished shooting last week and are starting post production on. Follow us on @praythehours .

None is the hour of the day when “shadows lengthen.” There are only a few hours left to daylight and the heart sinks to consider it, knowing that you will not complete all that you hoped to in this day (it applies equally to a lifetime). This is the hour to pray for courage, to rise up and ask God to help you focus on something that has eternal value. It’s a good hour to admit your limitations and embrace grace.