Setting Things in Motion, Keeping Them in Motion 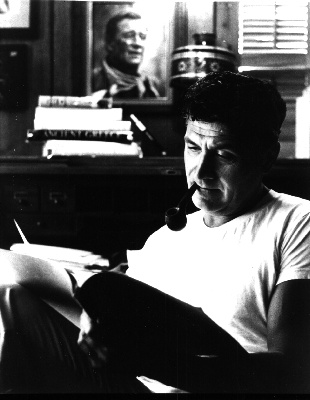 Francis Ford Coppola said that a film gets made three times: when it’s written, again when it’s shot, and yet again when it’s edited. These are all crucial stages to storytelling in film, and each one has its own demands and creative requirements.

We are in a season where all those stages are intermingling: we are editing Compline and None; syncing Terce so it can enter the editing process; shooting pick-ups for Terce and None; finishing scripts while in preproduction for Sext and Prime; and drafting treatments for Vigils and Lauds. That doesn’t take into account all the ancillary elements to keeping a production going. Blogs and tweets and posting facebook updates and finding money, filling out our equipment packages, casting, securing locations and navigating the never-ending challenge of no-budget filmmaking: scheduling. 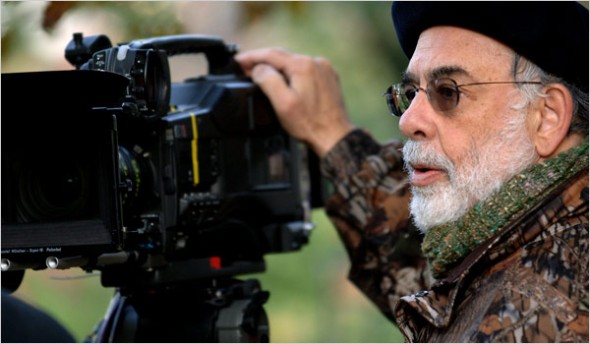 It’s good to stop at this stage and acknowledge that everyone who lends a hand during this time is donating to the Praying the Hours project. The hours that Meaghan Baldwin has spent in Pasadena sync’ing audio and picture for Terce. The hours that Greg King has spent at his studio in Los Angeles helping to define the editing style for the project through his work on Compline, or those spent by Patrick Duff helping to bring the footage for None to life. 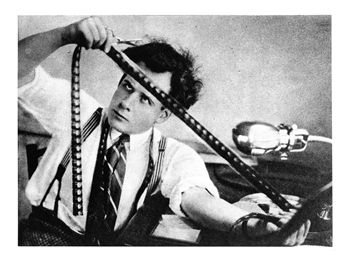 The hours and hours and hours spent by producers Rob Bethke, Ron Allchin, Matt Webb and Tamara McMahon who meet weekly to keep things in motion, to schedule (and reschedule), to search for lens prices, to ingest or copy footage, to color correct stills and to send the scores of emails necessary to firm up all the details of an active production shoot. And those who pray and who send money. All of them, filmmakers. 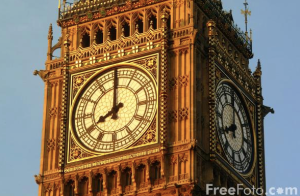 Somewhere I read that “time” was the noun most often used in the English language. Who knows how (or why) such surveys are conducted, or by whom; nevertheless, that result would not surprise me. We live in time the way fish live in water, so talking about it—or making films about it—opens us to a world of reflections as vast as there are people on the earth. Yet it is surprising how similar our feelings and experiences are in time. We waste too much of it, forget the things that are most important, run out of it before we’re ready to.

Praying the Hours producer Ron Allchin recently received an article from a friend who knew that he was working on this project. The article quoted Kevin Miller in his book on Technological Prudence: What the Amish Can Teach Us:

For the Amish, there is a steadfast determination to make technology fit what anthropologists call relational time. The ancient Greeks and the Apostle Paul called it kairos, or “ripeness,” time. When we zip past an Amish buggy on a Holmes County, Ohio, or Lancaster County, Pennsylvania, road, it

hits us that our modern time is on a different wave length than the time those Amish in our rearview mirror are experiencing. Ours is a trajectory of time shaped like an arrow.  Chronos time gets us “there” quickly and efficiently but just as often leaves us feeling as if there is nowhere. There was little joy in the journey….

“A trajectory shaped like an arrow”—that’s a lovely phrase for chronos, and one that accurately describes the aim we take with hours intended to be productive, but that are often woefully empty. In this film project, we are trying to imagine the gap between kairos and chronos time visually, through the character of the Traveling Man. He’s called that because his journey in the film is from life toward

death, or put another way, from temporal time into the eternal. As he is crossing over, he witnesses his friends from a perspective hidden to him before the accident that ended his life on earth. And as each hour of his last day passes, he sees something he wished he had known before—something he attempts to communicate to those he loves and leaves behind.

If chronos is time felt like a released arrow, then perhaps kairos is felt like a kiss: immediate, memorable, alive, and life-giving. The analogy may be more poetic than practical, but it makes it easy to choose. 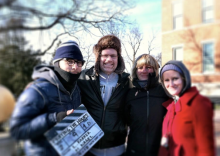 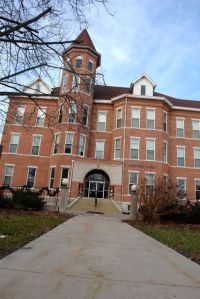 Working with the RED Scarlet

When I got the news that Red was FINALLY relinquishing the never-ending saga of the Scarlet-X, my heart skipped a beat. For months the discussion was what camera to purch

ase for our feature film “Praying The Hours”.  Up until this point I had only ever held a Red-One so I was excited, but a bit anxious to actually get acquainted with the Scarlet and shoot.   I met with our Senior DP, Abe Martinez and Producer, Ron Allchin a few days prior to leaving for Indiana to go over camera settings, the look of the segment and weather concerns, all of which helped to thaw my pre-existing cold feet.

Stepping out of the Fort Wayne Indiana airport on Christmas day was surreal in itself, but the slap of cold that hit my face put a new focus on what challenges the elements may have on our shoot. The Scarlet, being hot off the drill press, didn’t come with a weather manual (nor was there too much on the online bulletin boards).

During the course of the Compline shoot, Martina Nagel (segment DP) and I saw the gambit of weather: snow, sleet, hail, sun, and rain. Overall the Scarlet did well except for the few times it said ‘shutting down’ due to wind chill and shooting for prolonged periods of time. (And for you

uber techy camera folks out there who are researching the probable causes why your Scarlet is shutting down, it’s also noteworthy to mention that we had to use a Red One battery because our side handle didn’t arrive in time.)

Having the opportunity to shoot in Indiana and step away from the constant pulse of LA was a breath of fresh air (literally). More importantly, we set out to capture the story of Compline and hoped that the Red Scarlet could handle it. I think it did exceptionally well and I’m glad to have had the opportunity.