For those who follow us on twitter @praythehours, you know that we tweet at the Hour of prayer on which we are currently working. Our “terce” tweets ended a week or so ago because we’ve  finished shooting “Terce: the Story of the Single Mother,” and we’re entering a month’s worth of assembly cuts, scriptwriting, perfecting our shooting experience, and finance-juggling. In July we hope to start shooting again, but in the meantime, we’ll be tweeting on Compline into Jul 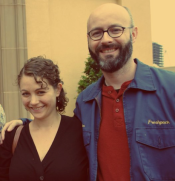 realizing how many have made this project their own, and are working with enthusiasm to bring it about. Tony, Wes, producer/writer Rob Bethke and I talked today at lunch about the Prime story of a man rushing through his own life. It’s the story that has had the most resonance with the men I know, who fight to be present in their own lives, and to remain human, while wresting that life into existence in the first place. A hard balance faced not only by men. Nevertheless, it’s an hour that has room for the unintended humor that often accompanies the idea that we are in control of our own lives, and we laughed as much during lunch as we talked or ate.

ing Compline. Compline takes place at bedtime, whenever that happens for you. For one inclined to symmetry in  praying the hours, Compline might take place around 9p.m. to mirror the hour of Prime at 9 a.m.; however, no one I know goes to bed at that hour. I chose 11p.m. not because I go to bed by then either, but I to leave room for Vigils to occur somewhere between midnight and 3 a.m. The tweets of Compline ponder the mystery of sleep, and how we enter that world of absurdity nearly every night of our lives only to return hours later without knowing where our minds have gone or for how long. This we rarely question, but it’s bizarre when you think about it.

These are good days, summer days, days with fans in the window at night and the sizzle of heat remaining on the concrete long after the sun sets late in the evening. If you live in Southern California, they are bright days of outdoor movies, visits to the beach, and groggy afternoons at your computer desk. Our dreams during the summer are different than those of winter: they smell of night-blooming jasmine, sticky watermelon rinds in the trash, and the musk of desire—for love, for adventure, for something extraordinary to happen. 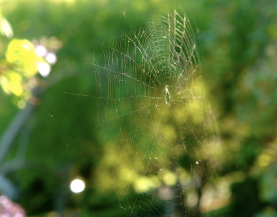 The first time I went to see a 70mm widescreen film at the Cinerama Dome in Hollywood, I was an adolescent, and I sat with my father on the far right side. I don’t remember what film we saw, but I do remember it being good enough that I wanted to return to see the left side of it.

Sometimes you get an idea for something too wide to fit in your field of vision. Seeing only portions at a time can be a mercy, though, as the entirety can be daunting. Recently as I was describing the Praying the Hours project to someone new, he said, “So it’s like a feature film and a television series.” Right, I thought. It sounds overwhelming when you put it that way.

Eight producers, nine lead actors, a gang of supporting and extra roles, many locations and shifts of people on cinematography, DIT, and editing—that’s our ground floor. I was at an event recently where a stranger introduced himself and said, “I’m working on your movie.” It’s the first time that’s ever happened. Once, I set out to estimate the number of locations, shooting days, actors, and pages of script that we are likely to accumulate by the time we finish. I stopped, sensing it is better to live in mystery when it comes to impossible tasks. David Mamet says, “work until it’s done.” That’s our focus.

But here is evidence to back up our faith: a great team of producers; fantastic actors who are willing to be vulnerable beyond what a director could hope to request; one Hour shot out in Indiana (Compline: The Story of the Reluctant Teacher); one Hour done in Echo Park (None: The Story of the Mournful Songwriter); and the next Hour (Terce: The Story of the Single Mother) nearly ready to go. Audio and video files are being synced for editing, equipment packages are slowly being completed, and new team members are being added weekly.

[By the way, welcome Wes Halula, who is working on the script for Prime: The Story of the Rushing Man, and Glen Hall, who is our production design consultant.] While people float in and out of our filmmaking ecosystem, we often say to ourselves with surprise: it’s happening. 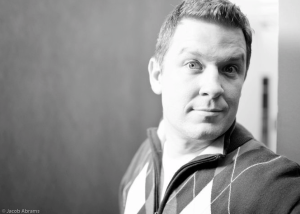 A no-budget production can share, ironically, a freedom similar to a production with an unlimited budget because for us both money is no object. We cope calmly with shifting schedules, losing and gaining team members, locations, story plans, equipment, and/or finances because the biggest risk is the one we took when we set sail in the first place. It’s been impossible from the very beginning, so the fact that it’s getting done is like watching the experience play out in the Cinerama Dome—bigger than we can see, happening right before our eyes, can’t wait to see the whole thing.